I never really talked about our first foray into travel with Ronan. We took him to Florida when he was 4 1/2 months old when Andy had a convention in Orlando. We spent about a week there and then spent a long weekend with my family in South Florida. We did a ton of prep and when I started writing a recap of our experience it was ballooning in a 3-part series, which is just too much info about traveling with a baby.

So this time, I wanted to do a little comparison of how it was then and now.

Holy lord, it’s a mess no matter what. I started making a list way in advance of what we would need. Basically it was just notes of all the stuff we used during the day. The first time around I had to account for pumping and breast milk storage since he was still all milk all the time. I also had to find a swing for him since he was napping in a swing every day. This time I had to take into account that he walks and needed a convertible car seat and food and entertainment. So both instances had some basics like clothing, diapers, sleep stuff, pacifiers, and all my stuff. The first time was more about keeping him comfortable, this time was more about entertainment.

The first time I flew with Andy. We had to carry my breast pump and food and baby stuff. I was so anxious about sleep since he still was being fed twice at night, so since we had 2 suitcases I split his sleep stuff (PJs, sleep sack, bottles) into both suitcases so if one got lost the other would have stuff for him. This time I flew alone and we had one giant suitcase with everything.

Both times we got him his own seat since he chills out in a 5-point harness. This is so worth it. Not having to hold a baby or a toddler the whole 6 hour flight is fucking worth $400 (helped that my parents picked up the tab on this one and the first flight we covered with travel miles).

For the first flight we packed entertainment for both of us adults, my pump, a change of clothes for Ronan and each of us, lots of snacks for us, and enough breast milk for a whole day on the road.

For the second flight I brought entertainment for me and him, a change of clothes for him and a shirt for me, lots of food, and all the diaper bag stuff. I crowdsourced (aka asked Facebook) the best toddler entertainment options. I ended up buying him a Quiet Book and brought along a book with a finger puppet, washi tape, and so. Many. Snacks. I now know that the most interesting things to him were the cups from the beverage cart and being able to take things out of the seat pocket. He also flirted with the people around us a lot and those who were into it played and those who weren’t didn’t. No one seemed overtly upset about my super cute baby being super cute.

We had a couple of tough moments with him where we experienced turbulence and he had to be put back in his carseat after I let him out. He wasn’t a fan, but I gave him a paci and his Peep and distracted him with a finger puppet and we were back to being ok. He also chilled if I turned the overhead light on and off, I just made sure it wasn’t pointing in his eyes.

He napped on both flights and that’s when I got a break. I brought a book, but now I know that that was not a great choice. The iPad with downloaded episodes of House of Cards and a diverse Podcast playlist on my phone with one headphone in was the best entertainment for me. I didn’t have the ability to relax enough into a book, but these were both options for entertainment when I was tending to Ronan (Podcasts) or not (House of Cards).

On the flight back, I put him down for bed and did our whole bed time routine including bottle, stories, and songs. I had to give him a paci to calm down, but he chilled and slept for the 2 1/2 hours until we landed.

A quick note about the airline I few. I flew Alaska and I have never been so well taken care of on any flight ever. I sat in the second to last row so we’d be near the bathroom and the galley. The flight to Florida was chill and the flight attendants regularly checked on me. The flight to Seattle was equally chill, but the flight attendants kept dropping me little “mommy gifts.” By the end of the flight I had a free entertainment unit (they normally rent them for $10/flight), 2 glasses of wine, a fruit and cheese plate, 2 full cans (!!!!) of ginger ale, and chocolate. They were so sweet and made me feel very special and gave me tons of compliments about how chill Ronan and I were on our flights. I think the combo of baby+alone mom+lots of smiles= lots of special customer service. Fly Alaska. They know what’s up.

Security was the biggest concern for me on the trip. With a car seat, the stroller, my diaper bag, the liquids, my purse, shoes, jackets…a baby, I was nervous about all the stuff and tracking I would have to do to get through security. Fortunately, the agent at the bag drop granted Andy a gate pass, so he was able to come through security with us. This was so helpful since when it was all unloaded on the belt we had 7 bins/things we had to track, which is just on the outer limits of what my brain can manage. Even with Andy we almost left Ronan’s blanket behind. It was also helpful to have Andy so I could use the bathroom and get water without having to track my squirrelly baby. Also Andy got some final snuggles with him before we got on the plane.

On the way back we had to go through Ft Lauderdale security, which makes a particular effort to be the most un-customer friendly it possibly can be. They initially didn’t grant a gate pass to my mom, but when a supervisor came out of the back and saw me with all my stuff and the baby, she relented. This was so helpful since they had just changed security measures and we now had to take any electronic larger than a phone out of our bags and we had to spread all the liquids out in a bin so they could be seen individually. So I had one more thing to track on my way through. There was only one line open and the TSA agent was telling everyone individually what had changed. Fun.

Mom held Ronan for a bit and was able to help me collect things on the other side. Then she treated us to dinner and got to hang out with us for the 90 or so minutes we had before boarding.

So, moral of this story, it doesn’t hurt to ask for a gate pass, but don’t expect people in Ft Lauderdale to be helpful.

The first trip was still part of the early daze. Lots of tracking milk intake and planning naps and walking around. The weather on the first trip was gorgeous. Mid to high 70s, low humidity. It was November so the Disney Christmas decor was out and it was gorgeous. We ordered diapers to arrive at the hotel and we ate lots of sandwiches and snacks until we got to my family, who cooked for us a lot.

The second trip was much more mellow. Sleep was sort of all over the place. Ronan slept through the night thanks to hurricane shutters that provided a super dark room and my travel Bluetooth speaker that played white noise from the spare iPhone. Ronan got his own room, which was good because my biological clock didn’t let me fall asleep before 1a EST (10p PST) every night. I was slightly more rested than the last time when I was waking up multiple times at night. We were fed every meal of every day by my family, so no need to figure out food for either of us. 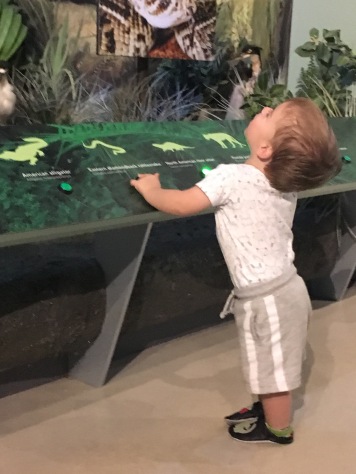 We did an overnight in Orlando to visit my dear friend Julie. She and her husband met us  from Tallahassee. It was so hot and humid. Ronan was just miserable until we were in A/C. He was stuck in his stroller since he’s still not reliable to follow me or stay nearby, so as we walked around, he got to a point where he just wanted to get out. I think when we do this again we’ll just stay close to the hotel and go to the pool or stay in the room. He was happy to run around the room and Julie, her husband, and I were happy to snack and watch the Food Network. Lesson learned. 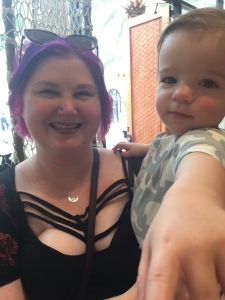 So overall, while this trip had the potential for more stress (traveling alone with a toddler), it was ultimately easier from a logistics and keeping the kiddo chill the whole time. We will continue to get a seat for him since that helps both of us. Next time I’ll likely pack a lot less on the flight itself and remember that I have a surprisingly chill and adaptable baby, so I don’t need to stress as much about meltdowns and stuff falling apart. Also, I will definitely be flying Alaska again and if I don’t get offered free wine by the flight attendants, I will definitely purchase a glass to keep my nerves a little chilled out.

This is a text widget. The Text Widget allows you to add text or HTML to your sidebar. You can use a text widget to display text, links, images, HTML, or a combination of these. Edit them in the Widget section of the Customizer.